The cultivation of aloe is an organic crop, without the need to use dangerous pesticides and fertilizers. In this way, it contributes to the protection of the environment, since it has reduced needs for water and organic fertilizers, while at the same time it does not require a large number of salaries per year. One person can manage 90% of the work during the year.

Aloe vera barbadensis Miller cultivation can coexist with domestic animals, such as sheep and turkeys, in order to remove unwanted weeds. It has no serious enemies other than the snail, which is treated organically.

An important role for the growth of the plant plays the microclimate of the area in which it is grown, specifically in areas with mild winters (temperatures above 6 degrees Celsius) and in soils that have good drainage. Such areas are Crete, the southern Peloponnese, the islands of the southern Aegean and Cyprus. 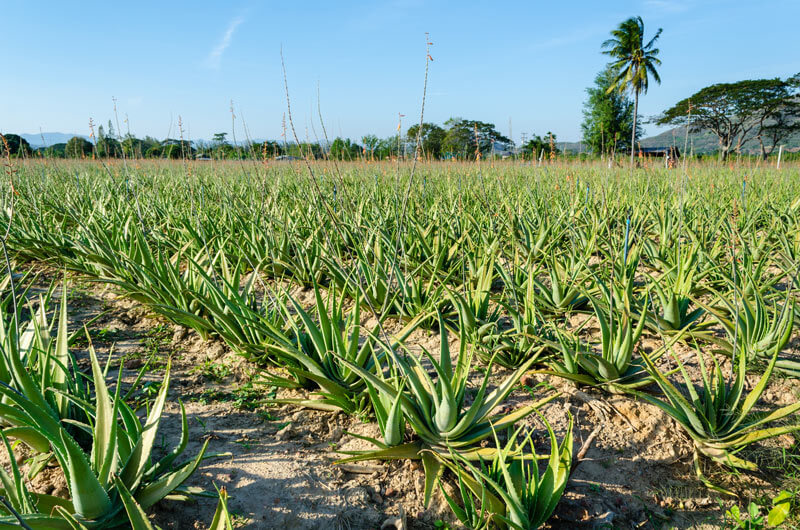 GG HELLENIC ALOE has setup a group of growers with whom it cooperates in the form of contract farming .

We sign a seven-year cooperation contract with them, during which we provide the necessary know-how that the producer needs in order to cultivate the plant properly.

Based on the above contract, there is a guaranteed distribution of the production throughout the 7 years. In combination with the guaranteed and pre-agreed security price, we provide the grower with the guaranteed amortization of his investment within two years from the planting. Then the crop provides a satisfactory income per acre.

For more information you can send your request by filling in the following form:

Fill in the following application and we will contact you as soon as possible!

This website uses cookies to improve your experience while you navigate through the website. Out of these, the cookies that are categorized as necessary are stored on your browser as they are essential for the working of basic functionalities of the website. We also use third-party cookies that help us analyze and understand how you use this website. These cookies will be stored in your browser only with your consent. You also have the option to opt-out of these cookies. But opting out of some of these cookies may affect your browsing experience.
Necessary Always Enabled
Necessary cookies are absolutely essential for the website to function properly. These cookies ensure basic functionalities and security features of the website, anonymously.
Functional
Functional cookies help to perform certain functionalities like sharing the content of the website on social media platforms, collect feedbacks, and other third-party features.
Performance
Performance cookies are used to understand and analyze the key performance indexes of the website which helps in delivering a better user experience for the visitors.
Analytics
Analytical cookies are used to understand how visitors interact with the website. These cookies help provide information on metrics the number of visitors, bounce rate, traffic source, etc.
Advertisement
Advertisement cookies are used to provide visitors with relevant ads and marketing campaigns. These cookies track visitors across websites and collect information to provide customized ads.
Others
Other uncategorized cookies are those that are being analyzed and have not been classified into a category as yet.
SAVE & ACCEPT
Scroll to Top
0
CART
TOTAL
€0.00
CHECKOUT